Just about a week ago, I had the wonderful privilege of attending the 6th annual SEA-PHAGES Symposium. Situated on the gorgeous Janelia Farm Research Campus in Virginia, the symposium lasted for a whole weekend and hosted more than 240 students and faculty from over 75 colleges around the nation.

I was pleasantly surprised that everyone who attended was as excited about bacteriophages and research as I was. During dinner, Laura (one of my peers from Dr. Schildbach’s section) and I chatted with Carnegie Melon phage hunters about different ways to perform genomic sequencing. We couldn’t stay and talk for long, as we were quickly swept into a whirlwind of presentations and talks. Students, faculty, and even Dr. Graham Hatfull himself (a celebrity in the phage hunting world – he founded the national Phage Hunting program) gave captivating presentations about their own experiments and experiences with research. The guest speaker this year was Dr. Martin Chalfie, a Nobel laureate who shared the 2008 Nobel Prize in Chemistry with two other scientists for discovering and developing the green fluorescent protein (GFP). His presentation was not a lecture on the wondrous studies and experiments he had performed (which I am sure there are many), but rather he weaved a fascinating story about his path of scientific discovery and its implications on society as well as his own life. He did briefly discuss the logistics of his experiment and how it led to the ultimate discovery that GFP can be used to identify cells expressing specific proteins – his clarity of presentation was astounding to me, as even I could easily understand what a man of his caliber was teaching. However, the thing that struck me the most was his description about starting out as a young scientist, not unlike the ones sitting in front of him. He made it sound like research was easy to pursue as long as you were curious and determined enough. This opened up my eyes to a plethora of possibilities because, to be honest, I was never really quite certain that I would be able to find solace in the intimidating field of biological research.

However, my job at the symposium was not to just simply listen to and soak in all of these wonderful presentations – I also had the opportunity to present a poster about the experiments performed by my class during the school year. There were two sessions in order to accommodate the multitude of posters that were being presented. I was scheduled for the second session, so I used my free time during the first to talk to a few presenters and see what other schools were doing. Some schools decided to pursue independent projects in the wet lab, like we did, while others focused more on bioinformatics or applications of phage therapy. One of my favorite posters included a presentation from North Carolina State University, where the students there were working on finding a phage that could target Paenibacillus larvae, a type of bacteria that can infect and kill honeybee larvae, as a means of rescuing the dwindling honeybee population. It was so fascinating and inspiring to see that the research we are doing has an immediate application to the real world. 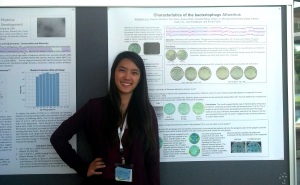 The second poster session, during which I presented, sailed by smoothly enough, probably because our class had a poster presentation right before the semester ended, which left me feeling confident that I was relatively well prepared for any questions headed my way. I remember that one of the researchers asked me what the most interesting thing I learned throughout the course was. Looking back on it, he might have been asking me for an interesting fact about phages or even a question that our experiments left unanswered, but before I could reflect on his intent, I blurted out that I learned how hard research was. All the experiments we performed had procedures and guidelines and even expected results; however, along the way, plates got contaminated, HTL ran out, and many of my experiments failed. Despite not everything working out as expected, the most important thing I learned in class was that a contaminated plate is not the end of the world- you’re going to stumble a few times before you end up with the results that you want.

I am so thankful to have had the opportunity to participate in the Phage Hunting Symposium as well as the class itself – from dealing with contamination to actually getting to see my phage under the electron microscope to meeting people equally as excited about science as I am, I have been able to learn something from every single one of the ups and downs I’ve experienced in this class. Thank you to Dr. Fisher, Katie, and all the Mon/Wed Phage Hunters for making this class one of my most rewarding freshman year experiences!

This entry was posted in From the Phage Hunters. Bookmark the permalink.