A unique marvel unravels in the undergrad teaching labs at Johns Hopkins University. Yet, the source of this marvel is unexpected. The undergrad teaching labs hold numerous PhD chemists, biologists, and those of many other academic fields, who produce magnificent research for the academic community. However, the source of the marvel comes not from these academic giants, but rather from the developing giants running around the bigger giant’s feet. More specifically, this marvel comes from 24 phage hunters that occupy the lab Mondays and Wednesdays.

The stage is set. 24 young freshman were given a goal. This goal? To create his or her first novel impact on the scientific community. This impact comes in the form of discovering new mycobacteriophages. However, there is only one slight problem. Only one phage will be picked at the end of the semester for further DNA testing. The implications of this means that out of the 24 individual phages the freshman will discover, only one will make it through to DNA sequencing. Thus the phage games begins.

Representing the only lab station where goggles are worn every lab section, Jack Korleski has recently crowned his lab station representative in this year’s phage games. The process consumed much of Korleski’s time and thought over these past few weeks, and the final decision brings relief in his life. It all started when the results of enriching his soil sample were observed. These results displayed a possible four different plaque morphologies, potentially from 4 different mycobacteriophages in Korleski’s sample. The prospect of determining a representative from four possibilities overwhelmed this young freshman’s mind. Yet, his mind quickly calmed after the result of streaking proved that only two different plaque morphologies. Then after a few more rounds of streaking, the decision became clear. Korleski knew which mycobacteriophage would represent his lab station. This plaque type is denoted by #1 –refer to picture. While the decision is complete, the games have only just begun. Korleski must now generate an original, creative name to associate with his mycobacteriophage. After this, Korleski must prove, through data and marketing, why his mycobacteriophage must be crowned phage champion. 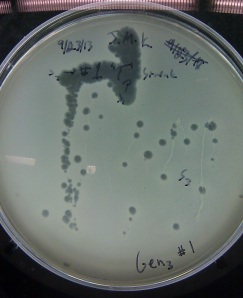 Will Jack Korleski’s mycobacteriophage win the phage games? Or will another lab station produce the victor? The answer is unknown but shall be determined. Good luck to all those who compete and may the phages be ever in your favor!

Image | This entry was posted in From the Phage Hunters. Bookmark the permalink.

1 Response to The Phage Games