This is the life lesson I have learned so far in my Phage Hunting class: you can’t always be successful on your first attempt at something. I’ve been forced to repeat myself over and over and over…and finally I’m starting to see success! Here’s the story of my phage:

I started like everyone else, collecting dirt from the bank of a small creek near campus. I was sure that at least one of my two samples would yield something, but unfortunately that wasn’t the case. I used one sample for direct plating and the other for enrichment, and they both produced the same results: absolutely nothing. So, I went out and got three more soil samples from various locations around campus, used them for more direct plating and enrichment, and STILL got nothing. I did a spot test with my amazing lab partner Bettina; my spots got (surprise!) nothing, and all three of hers got perfect, beautiful plaques. Fortunately for me, she was nice enough to let me use her phages, too, so we both began purifying her three potential phages. This is when I finally started to see results.

We each streaked all three of the plaques to completely purify them. Some weeks, my streaks looked perfect, while other weeks, hers looked amazing, even though we were using the same phages. Once I got to my second streak, I began two see two different kinds of plaques on some of my plates; some would be clear, and others were cloudy. This meant that I had to streak each type individually to attempt to isolate one from the other. I thought I was successful, until I got to my phage titer assay, when I began to see both kinds of plaques on the same plate again. Needless to say, I wasn’t too happy. I had to go back to streaking separately, and as I write this blog, I am awaiting the results of this streaking. 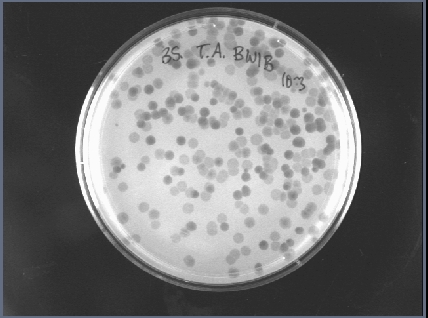 So there’s my story so far. Now I have learned that even if I’m not successful with my first attempt at something, I can’t become discouraged and I have to keep trying, even though it means ending up with about 30 plates, way more than everyone else. Even though the phages I’m working with aren’t actually my own, I love them as if they were. Hopefully we will both find a different phage, and in a few weeks we can be the proud parents of two healthy, beautiful baby phages!

This entry was posted in From the Phage Hunters and tagged adoption, bacteriophage, direct plating, enrichment, isolate, phage, streak, streaking. Bookmark the permalink.